Skip to content
Jarohat, a young HIV-positive women from Tajikistan, talks on national radio about the stigma and discrimination she experienced. RC of Tajikistan supports a series of airshows aimed at tackling prejudice and providing information on the disease. By Nichola Jones, IFRC

The real-life experiences of women living with HIV in Tajikistan are hitting the airwaves in a bid to tackle prejudice and provide vital information on the disease.

The series, produced by journalist Nargis Bozorova, is aimed at providing information and advice for people living with HIV – including legal advice, accessing health care and support services, as well as tips on hygiene. It also serves as a myth-buster for the general public to combat the stigmatization of people who have HIV. 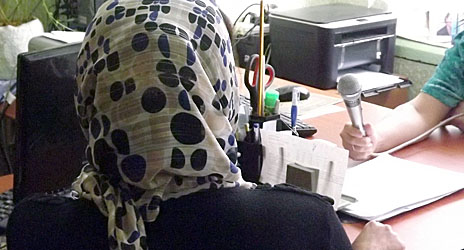 Jarohat*’s story is among those to air as part of the Red Crescent of Tajikistan project, supported by the International Federation of Red Cross and Red Crescent Societies.

She is a young HIV-positive woman living in the Khatlon region of Tajikistan with her four children. Her husband went to Russia to find work, returning home just once or twice a year. When she was pregnant with her fourth child, doctors delivered the shattering news that she had tested positive for HIV. She had to be hospital-registered and closely monitored throughout the pregnancy.

When it was later discovered her husband also had HIV, his family blamed Jarohat. When her treatment began, her husband’s parents swore her to secrecy and she was kicked out of the house.

“My husband infected me, but his parents blamed and kicked me out with four children,” she said. “Now I live with my children at my parents’ house.”

Against the odds, Jarohat gave birth to a healthy baby. She is one of 426 women in Khatlon infected with HIV/AIDS, according to the regional AIDS centre. The total number of people affected in the area is 1,357.

“About 35 families, whose members are infected by this virus, are registered in Qurghonteppa city and most of them from labour migrants’ families,” said Akram Davlatov, director of the regional AIDS center in the Khatlon region.

The radio shows are part of a wider HIV/AIDS awareness and information programme that has been running since 2014 and funded by AIDS Infoshare, a Russian organization specializing in HIV/AIDS treatment and information.

The original broadcast of Jarohat’s story can be found here: https://soundcloud.com/rcstmigration/radio5-aids-awareness-in-rcst-qurghonteppa-centre-for-migrants